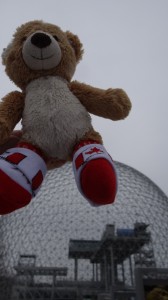 Clearly it is cold in Canada, but during winter it is even worse than you would expect, if you are not coming from Alaska and used to cold weather. The first 200$ spent were for a hot coffee, a pair of warm winter-boots, gloves and a wool-hood to cover your head and ears. Even Teddy got a pair of Canada-socks. Getting to Canada from the US (e.g. Newark) can be quite cheap if you use Porter Airlines. Just be advised, that if there are troubles at the airport due to the weather condition, of course, cheaper airlines have to wait more.

Once arrived at Montreal, you can take the Bus 747 directly towards the city center. There is an airport ticket which is valid for 24 hours. A lot of people say, that due to the french influence, Montreal and Quebec in general is very European. This didn’t seem to be the case, at least not during this weekend. The food is a bit better / healthier but more on that separately. For a great first impression, Teddy recommends getting up the “Mount Royal Plateau”, the hill which gives this city its name. 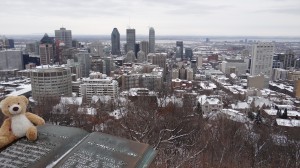 You’ll get a great view from there!

Teddys advice: Don’t go to Montreal during winter and if you do anyway bring your warmest clothes, otherwise you need to buy everything there. Don’t underestimate the wind! Don’t expect a European city. You can expect lot’s of different (european) cultural influences, mostly french, but it still is like a (north) american city. In three days you can see most of the important attractions and you’ll also be able to figure out where the great restaurants and places are.