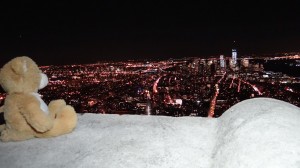 Not only is the Empire State Building 103-story high but it is also the 23rd tallest building in the world! But Teddy doesn’t want to bother you with tourist facts.

Globetrotter Teddy avoided long, annoying, never-ending tourist lines and enormous crowds by going to the top in the evening. Teddy was then totally impressed by lit up Manhattan. You definetely get an awesome look at the City that never sleeps. A must see building in the Empire State: New York!

Another hint: if you plan to make it to the top of both, the Empire-State Building and the Rockefeller Center, do the Empire State at Night an the Rockefeller during the day. That way, you have both, the amazing night view and better pictures during daylight!